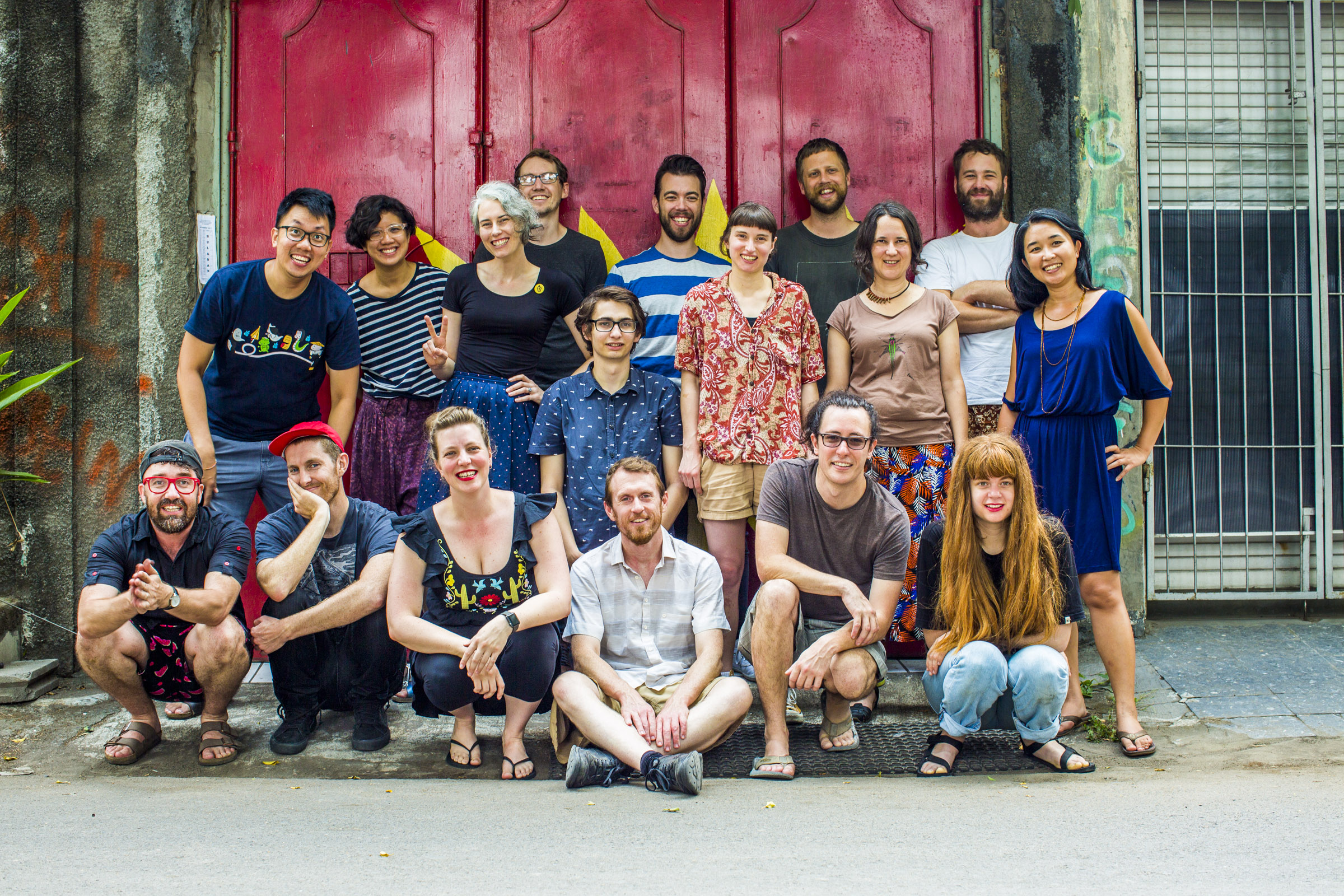 A million years ago in another universe (May 2015, Boston, Massachusetts) things were not going as planned. I’d just been laid off by the company that had been funding The Nib (LOL) and was sleeping on the floor in my old high school boyfriend’s apartment (thanks, Jem) trying to figure out what to do next. My partner was in Australia. I was broke and basically homeless in America. It was, as they like to say now, a ‘transition moment.’

Then one desperate and morose morning, my phone pinged. It was Pat Grant.

I’m just shaking the trees to see whether you’re keen to put in an app for the Comic Art Workshop?

I didn’t know Pat that well, just from comic circles in Oz, but I loved his art and I’d heard about this workshop he was putting together with Liz McFarlane from Melbourne Uni.

The gist of CAW was thus: 14 cartoonists from Australia and beyond bring a draft for a larger project (ie graphic novel) to an isolated former penal colony at the bottom of the earth to workshop. Each cartoonist gets an allocated time to have their work discussed by the brains trust present, with the aim to build a better comic.

You know, I thought. What the hell. w, six months later, I found myself standing in the laneway outside my mum’s old studio in Hobart, Tasmania, waiting for a bus to take me to a ferry that would convey me and a bunch of mostly strangers to Maria Island — a disgustingly beautiful wildlife refuge scattered with remnants from the Oyster Bay Tribe and crumbling ruins from our bleak and terrible convict past. I remember feeling a bit anxious, like it was the first day of school. Probably not helped by the fact that I had actually gone to the island for school camp in 1996.

My brother Jake, a filmmaker, and I often used to say that going home to Tasmania hit a reset button on our lives. It’s like from the moment you see the mountain, Kunanyi, something melts away. The anxiety of life on the mainland, or in America, suddenly seems silly and unimportant.

The experience of the first Comic Art Workshop was like hitting the Tasmanian reset button hard and then pelting full speed into a thrilling wave of inspiration while holding hands with your best friends. It was honestly the most meditative and rewarding and professionally exciting two weeks of my life.

Each day I woke up at six for breakfast with the absurdly early dads, Fionn, Pat and Campbell, and my morning constitutional exploring the island before the workshops began. Our daylight hours were filled with intense discussions about manuscripts and thumbnails, seminars about financial security in the arts, hiking, swimming and trips to draw the impossible wall and a crazy bush. I built fires and drank tea from my cracked mug and remembered I was a professional comics editor with actual skills. It felt good to help people with their work. At night we held impromptu water colouring seminars with whiskey, played ping pong and talked about our lives. One evening I organised a ghost story tour, assigning my workshop companions different derelict building locations around the convict settlement to inspire a scary oral fiction. I’ll never forget Leigh screaming into the inside of the silos with a torch held up against his face, or Josh whipping his hair around in the middle of stone circle on top of a mountain ridge in the dark.

On the weekend in the middle, my dear friend Anna came to visit and a small group of us hiked out to the far end of the island to sleep under the stars. It was one of the few times in my life I’d seen the night sky in its entirety without the intrusion of light pollution and it was frankly magical. Then there was my workshop. Unlike the rest of the group, my extremely loosely planned project was not being designed for print, it was to be a longer non-fiction webcomic for The Nib. I put post it notes and sketches and the transcript from an interview I’d done on a board and the team dissected the yarn, systematically pulling out threads and questioning me like a new prime minister the day after a leadership spill. It was incredibly valuable.

That comic became ‘Reported Missing’. It took me 18 months to complete the insane research, writing, drawing and hand water colouring 60 pages, during which time the workshop met once more in a community center in Melbourne. The comic won awards. It’s still the longest piece The Nib has ever published.

But, if I’m honest, it’s the human connections I made at CAW that year have meant the most. I love these people. It’s rare as an adult to spend that kind of time with other people, building relationships in a way you don’t often do outside of university. I feel so lucky to have had that time with them. Two years later, when ‘Reported Missing’ was being released, I was in Jogjakarta, Indonesia, for the next Comic Art Workshop. This time we were being hosted in the middle of a bustling city by a screen printing studio, Krack! The workshop cast rotated. Instead of bunk beds we were in hotel rooms and we held Read to Me events as part of the Jogjakarta Biennale and the Ubud Writer’s Festival. Jogja is a vibrant and fun city, I still think about some of the art I saw in the galleries there. I made new friends and threw myself into some really amazing graphic novel projects, struggling at times to focus through all the sweat and sickness. It felt like some of the connections forged on Maria Island got stronger, but also it was such a great opportunity to meet more Indonesian and Malaysian cartoonists. My mind was opened to art and ideas that I had not before considered. Lychees were eaten as characters were dissected and sketches taped all over the walls before jumping into a blue tiled hotel pool. It was an unforgettable experience that was completely different to the first.

Yet it’s hard to talk about Indonesia on a professional level, because while a lot has happened since, I haven’t worked on any bigger personal projects. In Jogja, I was workshopping a graphic novel version of ‘Reported Missing’. I had an outline drawn, but I was waiting for real life to catch up… and more than two years later the appeal for Sue Neill Fraser, the woman at the center of ‘Reported Missing’, remains ongoing. I still plan to make a larger work on the subject for print eventually, but I can’t really start until there’s some kind of legal resolution.

In November 2019, I headed out to Dangar Island in the Hawkesbury River for the most recent workshop. This time I brought a completely different project: a non-fiction graphic science book about fertility treatment. The Dangar crew was smaller, the workshop space more intimate. This workshop was about friends and colleagues meeting up, talking about their work and their work practices. There was a fair bit of group therapy and fancy tea. I got up at dawn again, this time dragging a kayak out onto the river and circumnavigating the island before breakfast. There was a lot of talk about money and relationships and the fortitude required to persist with a project that spans years of production. Emotionally, it was a different space for me too. It was unclear at that stage if my family would stay in the United States (it turns out we will), once again lost Nib funding had thrown a spanner in my life and I was feeling quite professionally lost. I still do. But it was so revitalising to spend the time on Dangar with artists whose work and practice I admire, like Sarah Firth and her incredible organisational tools and time management focus. Or Mirranda Burton, whose beautiful graphic novel Underground is set to come out later this year — a work she first brought to Maria Island. Five years is a long time to work on a project, but that is so normal for graphic novels!

This is the real crux of CAW. It has created new relationships and structure for professional development of Australia’s comic artists, given space for people to connect and learn from each other. Working on ambitious comic projects is a hard slog and you need pals. I wouldn’t be the artist I am now if I hadn’t gone to Maria Island.

On Dangar, Pat Grant and Liz Macfarlane stepped down from their roles as directors of the Comic Art Workshop. They had always planned for three workshops. Their lives have changed since 2015 and it was time for them to move on.

So I stepped up. Along with Josh Santospirito, I’ll be co-directing the project and working to make the 2021 Comic Art Workshop happen. We don’t quite know where it will be or how it will look yet. We do know it will be open for applications again.

So stay tuned! And buy a sticker to support the workshop.

PS Here’s a comic from Campbell Whyte about CAW that really gets under my skin and reminds me of “nowstalgia” – when you’re nostalgic for the moment that you’re in. 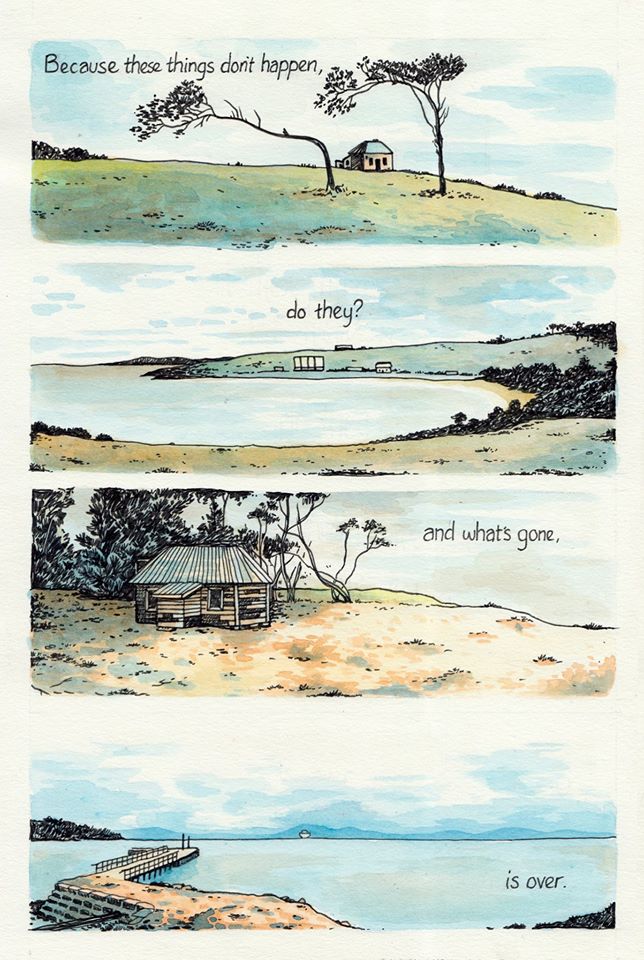 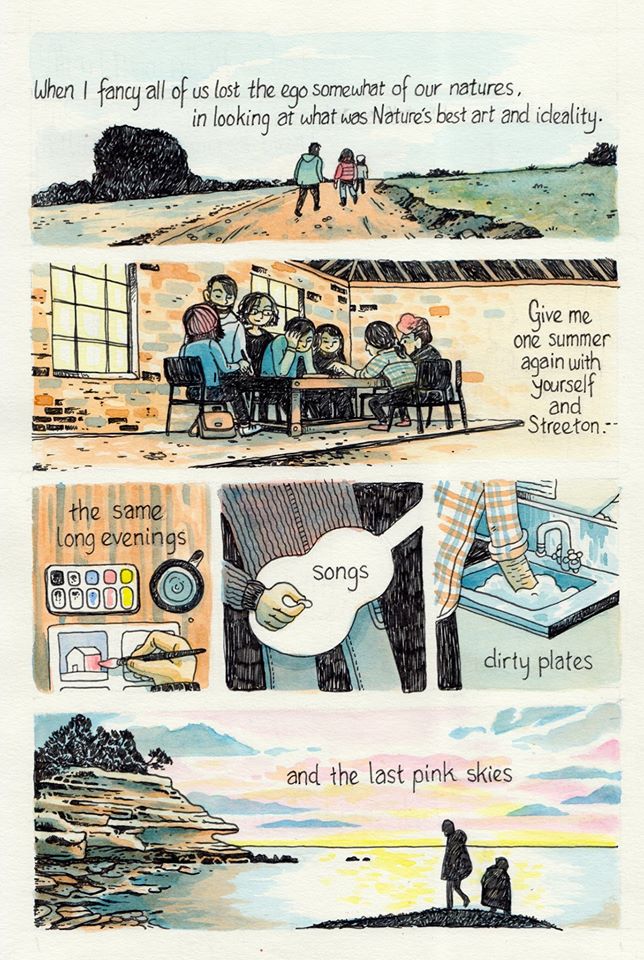 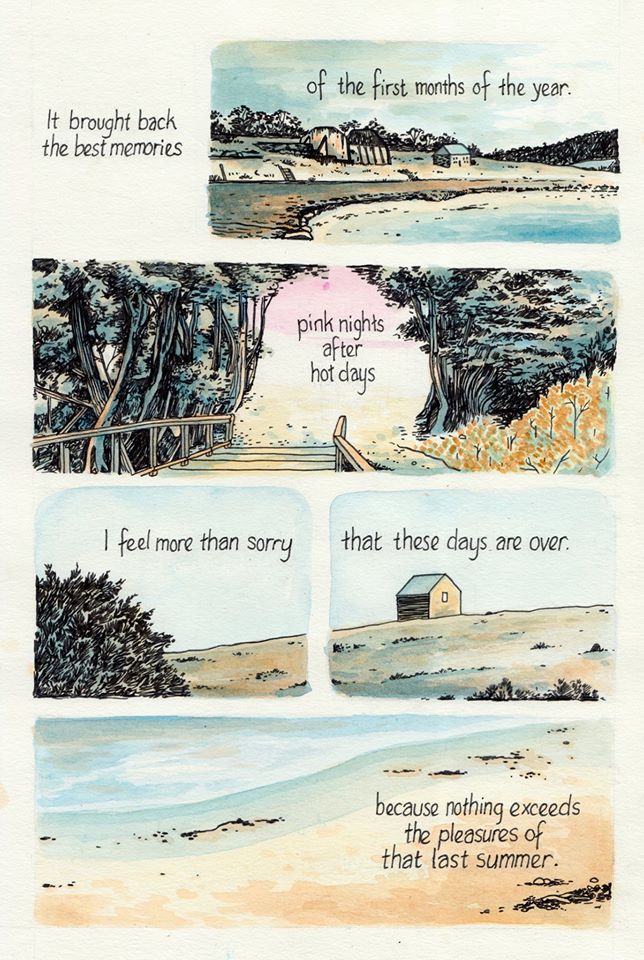 All photos by the wonderful Gabriel Clark.