APOLOGIES FOR THE DELAYED RESPONSE

I am always late.

About half of my emails these days begin with the phrase, “Apologies for the delayed response”. If you had told me that in 2018, I would have been horrified. I’m an editor, I would have told you. I’m on the ball! I know when everything is happening! And I did. I managed an insanely busy publishing schedule for a website, I managed other editors, I managed up to 50 different long-form comic projects with freelancers at a time. 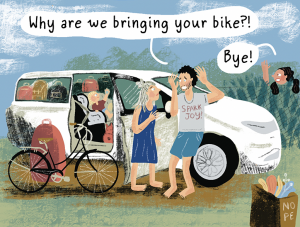 But then a whole lot of things happened all at once and so began a struggle that feels like it’s lasted far longer than two years. I became a Mum. The Nib lost funding. I went part time at The Nib. I started freelancing for the first time in years. I applied for over a hundred jobs and got three interviews. There was a pandemic. Portland went into lockdown. I suddenly became the full time carer for my toddler. I moved countries in the middle of a pandemic. My partner took a 60 hour a week job. My family lived out of suitcases for 10 months at the homes of relatives. We had limited childcare. I had nowhere to work except the kitchen table in a house of four adults and one noisy toddler who were almost always all home thanks to COVID-19.

And then, my grandparents reached a stage of ageing where they could no longer live safely in their own home. For seven months, I drove three hours to Sydney and three hours back every second week to help them. All our family were behind closed borders, in Norway, Hong Kong and Melbourne. Except me. I went to hospitals and nursing homes and doctor’s appointments and blood tests and to see a lawyer and to the bank so many times with my Grandad, Merv, who is 97 years-old. I cleaned out closets and found lost documents and went shopping for supplies of gluten-free frozen meals. I dealt with the insurance fallout when he crashed his car (that he wasn’t supposed to be driving). My other part time job on top of my actual part time job as a cartoonist and editor, was as a carer and administrator for my grandparents. Did I mention that I’m the mother of a two year-old? 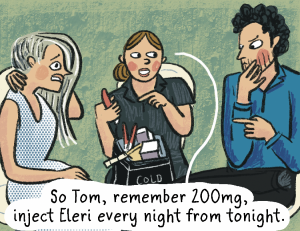 Meanwhile, we did two embryo transfers and a round of IVF and for some insane reason I agreed to make a feature length comic about it that was due basically the day it ended. Then we moved interstate to Melbourne, unpacking boxes of junk stored for three years in the crawlspace under my sister-in-law’s house. Nearly two months after moving in, I still haven’t opened many of the boxes that litter the floor in my studio space.

Against all odds, I got pregnant and spent a solid month vomiting my food up every three hours. It was hard to work because with the nausea I couldn’t focus very well, harder because partner’s job involves regularly being in the Australian National Capital for Parliamentary sitting weeks, leaving me to be a single parent for two weeks at a time. But the worst couple of days of “morning sickness” coincided with flying to Sydney for the weekend with my uncle to bring my grandparents to live in a nursing home in Melbourne. They hadn’t packed a thing. We had to do it all. A week later, I was back with my brother to spend six days packing up their entire house. Nearly a hundred years of accumulation in one enormous suburban building by people with even worse organisation skills than mine. I didn’t answer a single email in that time, because I was completely and utterly emotionally spent by the task at hand. In the past two years I have frequently been unable to respond to emails because I don’t have the time or intellectual energy.

And all the while I kept saying yes to things. Hell, I even attempted the Hundred Day project twice! I got to about 20 days each time and then could not scrape together half an hour to draw anything. What is wrong with you, is probably a good question to ask at this time. The answer is, honestly, ambition. I’m an ambitious person. I like big challenges. I like filling my hours with tasks. I’m competitive. I find it difficult to wrap my head around the idea that I do not have the hours my peers without little children inside or outside their bodies have. 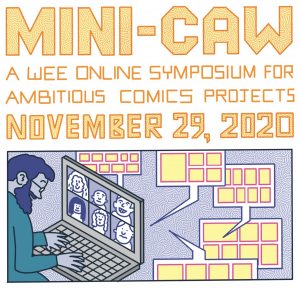 So through all of this I’ve worked on five issues of The Nib magazine, edited countless comics for the website. I’ve made comics for The Nib, for the AEU magazine, for Vox, for Folio, for Kuš. I’ve been a research assistant and illustrator on the Graphic Storytellers Survey. I’ve edited two graphic novel projects independently and a bunch more with the Comic Art Workshop. I’ve been the co-director of the Comic Art Workshop, organising Mini-CAW, a full day comics panel live stream, and working with the other director, Josh Santospirito, on the website, fundraising and the planning for CAW 2021 – a two week long artist residency in a remote location. I’ve been on a number of online comics panels, I’ve been a guest lecturer at the University of Technology Sydney and the California College of the Arts. I’ve been on the Make it Then Tell Everybody podcast and I’m hoping to run a fun comics workshop online soon.

I am privileged in that my partner’s job is enabling me to not take a full time position outside this work. I do wonder if that would be in some ways better though? Maybe a full time job where I focus on just one thing and then it’s done in a particular time frame would be easier to manage than this nightmare compounding hodgepodge of deadline guilt. But then where would my comics career go? This thing I have worked for a decade to build, that means so very much to me. It’s not like full time comics editing jobs are commonplace in Melbourne.

And the truth is, I love what I do. I love making comics and editing comics and organising events around comics. I say yes because I genuinely want to work on these projects. But I also want to go to the playground with my son and read books about cats to him and cook delicious food for my family and somehow not lose the plot.

I know I need to build better systems. Somehow figure out how to generate the time required to meet the deadlines I agree to. I’m starting out small, I’ve written a to-do project list on a chalkboard in my new studio space. I’m learning that I need to be okay with incremental progress. I added a note in my email signature that says I only work Wednesday-Friday. When the pregnancy exhaustion ends, I’m hoping to rise each day at the crack of dawn to do an hour’s work before my son gets up and demands Wheatbix, like my friend Campbell Whyte used to do. This is the only way I think I will be able to respond to more emails within a week of their arrival in my inbox.

Our new baby should be arriving in November. Unlike last time, I won’t have to create a maternity plan for my colleagues to interpret. But I will have to plan. The hard thing will be saying no and making sure I don’t take on anything that bleeds into those first few months of sleep deprivation induced madness. I don’t know how to do that yet. Advice welcome.