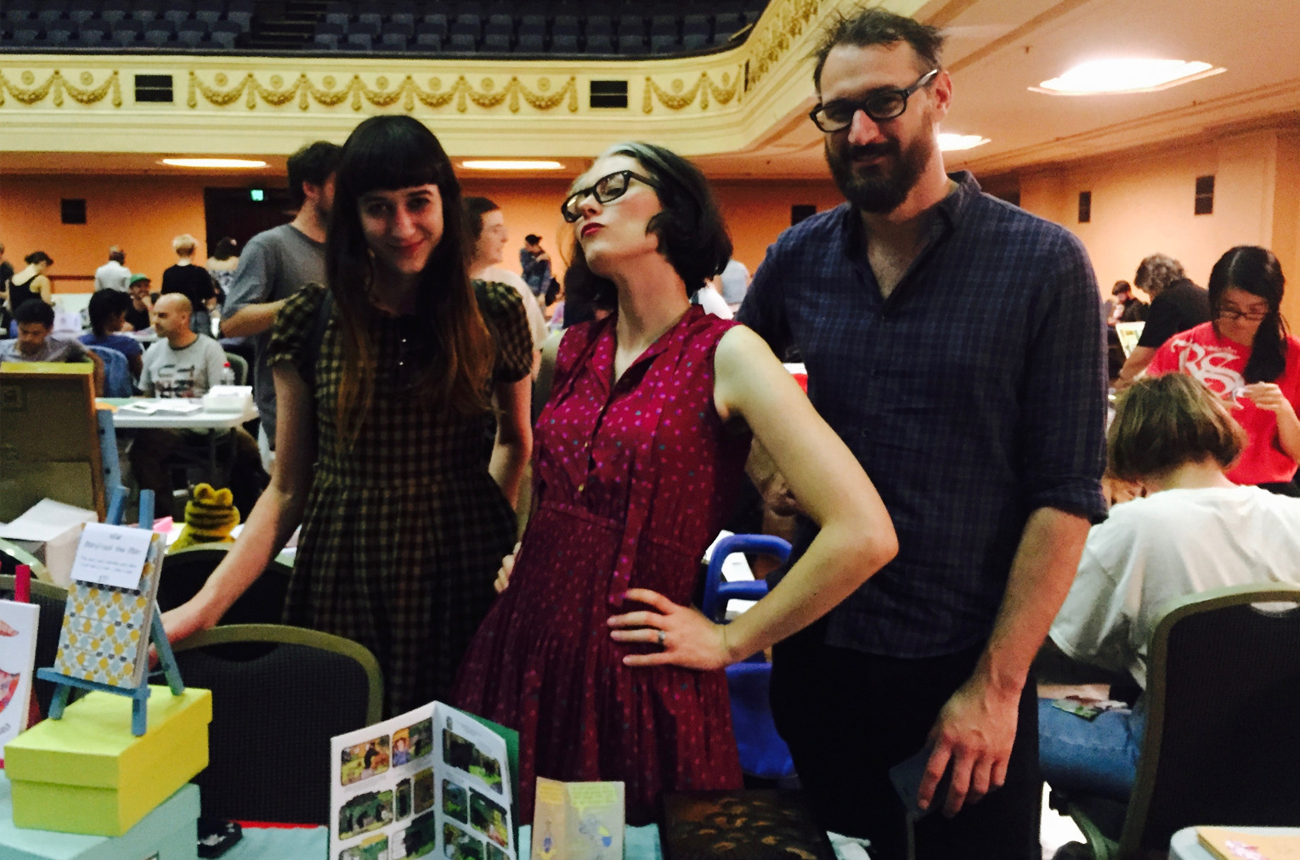 So… 2016 has been a massive year for me thus far, I’ve exhibited at six comics shows or zine fairs, been a guest at the Wordstorm Writer’s Festival and Her Majesty’s Favourite Really Great Graphical Festival, gone on a remote schools workshop tour in Arnhem Land, been nominated for an Eisner, participated in The Nib relaunch gallery show in Philadelphia during the Democratic Convention and sunk my teeth into my first ever long long comic project… PHEW! AND IT’S ONLY SEPTEMBER!

Here’s a summary of the insanity:

In February I tabled at the Festival of the Photocopier in Melbourne’s Town Hall with a collection of handmade, mostly screen-printed, zines or mini-comics (whatever you want to call them). At this show I debuted a jam comic I made with my brother and sister, filmmaker Jake Houston Harris and multimedia guru Catrin Harris (photo evidence below). This comic was called Brawd Neu Chwaer, which is Welsh for ‘Sibling’ (I was born in Wales), and featured a space cat, rainy tent disaster and near drowning. We’re planning to make an updated version later in the year.

Then (also in February) I hung out in a fancy hotel in Canberra for the very first Australian Comic Arts Festival, which was rather conveniently located because I could walk there from my house. I also got to hang out with some excellent cartooning friends and hear Jamie Clennett (author of The Diemenois) and Elise Jones (editor at Allen & Unwin) deconstruct the representation of indigenous Australians in comics made by white Australians in the bar afterwards. Who says cartoonists can’t generate complex intellectual debate?

In March, The Nib’s Eisner nominated anthology Eat More Comics, which I edited along with Matt Bors and Matt Lubchansky, made its Australian debut at the Noted Festival in Canberra. This was pretty exciting. I’m so proud of this book, even if we ended up losing the Eisner to Drawn and Quarterly’s massive 25th anniversary tome. I will point out that James Sturm totally name dropped me in the D&Q book, so I’m kind of “in” the winning one… kind of. In April I tabled at the Homecooked Comics Festival in Melbourne, where Jamie and fought for the Tasmanian Iron Cartoonist title and lost to a seven year-old Victorian called Reuben. It was pretty intense… Reuben had serious cat-drawing game.

In May I headed to Darwin for the Wordstorm Writer’s Festival, organised by the NT Writer’s Centre. There I did an impromptu open-mic storytelling performance and was on a panel about graphic novels. Hilarious really, since I draw non-fiction comics and the longest thing I’ve ever done was 40 pages. It was a lovely festival though and was followed by one of the most incredible road trips I’ve been on in my life… and I’ve been on like 100 road trips. Totally saw a crocodile on this road trip.

The inspiring and delightful Laurie May, a poet from Alice Springs, headed up this remote schools tour in Arnhem Land via Darwin and Katherine High. Along with comedy writer Leisl Egan and slam poet Zohab Khan, I had the privilege of spending a week teaching (sometimes collaborative) comics workshops with school kids. More on this later.

At the end of May, I went to the Other Worlds Zine fair in Sydney, which was packed full of talented arty folks with crazy experimental comics. It was so wonderful to finally meet a bunch of Sydney cartoonists I’ve talked to on the internet for years! There I debuted a wee little comic about the ghosts of teenage years passed, which I called Teen Ghost, because I’m obvious like that.

Then in June, I was a guest at Her Majesty’s Favourite Really Great Graphical Festival in my hometown, Hobart, Tasmania. Organised by my favourite ‘new’ Tasmanian, cartoonist Josh Santospirito, this little festival meant so much to me. I made a new screen printed poster for the occasion, which was kind of like a giant one page comic called ‘The Tasmanian Alphabet’. I also gave a presentation with one of my comics heroes Mandy Ord, who is just the nicest person ever and happens to make great comics too. MANDY IS SO COOL

Then in July I flew to the US to relaunch The Nib with First Look Media, alongside my fine editorial colleagues Matt Bors, Matt Lubchansky and Andy Warner… but that’s another story.